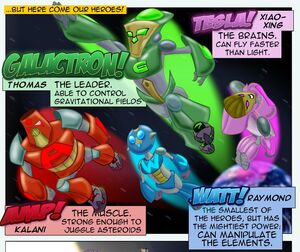 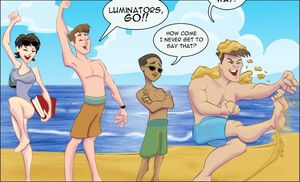 The Luminators are a team of galactic superheroes from from the David & Jennifer Skelly comic of the same name. When they are not fighting evil in space, they are normal teenagers from Manhattan Beach, California. Their boss is an alien named Telstar, and their primary Villain is a galactic despot called The Under Overloard. The team is made-up of:

Galactron (Thomas) who is the team leader. He is able to control gravitational fields (although, this could easily make him the strongest of the team, as he could circumvent weight, by neutralizing it!)

Amp (Kalani) is the strong-guy of the team, and handles most situations with blunt-force.

Tesla (Xiao-Xing) both the chick and the brains of the team. Her name (Chinese for "Morning star") suggest that she is ether of Chinese descent, or her parents have an affinity for Asian cultures. She can fly faster then light (over ‎671 million miles per hour!).

Watt (Raymond) is the runt and lancer of the team. What he lack in strength and stature, he makes up for his ability to manipulate the elements.

Retrieved from "https://zevo-3.fandom.com/wiki/Luminators_(team)?oldid=5364"
Community content is available under CC-BY-SA unless otherwise noted.